The International Society for Limb Salvage unanimously votes for Athens!

The International Society for Limb Salvage unanimously votes for Athens!

Athens has been selected as the host city for the 2019 Biennial ISOLS Congress, through a bidding process which took place recently in Orlando, USA. The bid file was prepared by Erasmus S.A. and presented to the general Assembly of ISOLS by Prof. Panayiotis Papaggelopoulos, Professor of Orthopaedics and Director of the 1st University Clinic of Orthopaedics in Attikon General Hospital. Other cities competing with Athens to host ISOLS 2019 were Istanbul and Moscow.

The Secretary general of ISOLS, Professor Douglas Letson highlighted the important international role of Prof. Papaggelopoulos in the field of musculoskeletal oncology and commented on the globally acclaimed clinical and research work of the M-S Oncology Unit of the 1st University Clinic of Orthopaedics in Attikon General Hospital.

The 20th Annual Meeting of ISOLS will take place in Athens, Greece, in September 2019. Further details will be announced in due course. To stay tuned, email us now.

In the photo below: A snapshot from the appointment of Athens as the host city of ISOLS 2019 featuring from left to right ISOLS President, Pr. Mark Scarborough, Pr. Panayiotis Papaggelopoulos, ex-President of ISOLS, Pr. Reinhard Windhager and Sec. General of ISOLS, Pr. Douglas Letson. 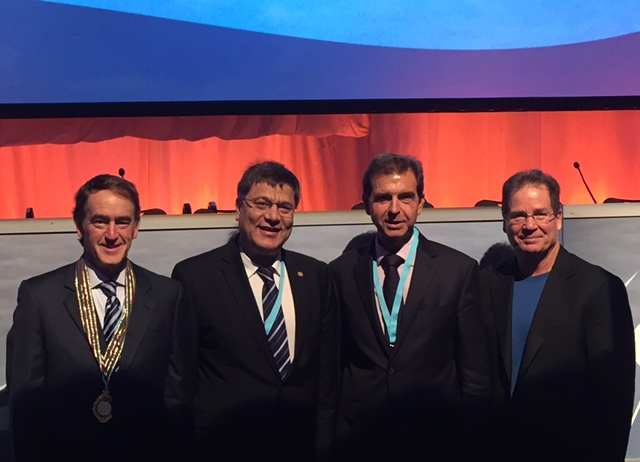