Tour to Aghios Nikolaos and Spinalonga

The tour is available on June 8th, and on June 9th

For reservations please fill in the Accommodation and Tours Booking Form

Aghios Nikolaos (8.500 inhabitants), capital of the Prefecture of Lassithi, is without doubt the most picturesque harbour in Crete. Built on the west recess of Mirabello bay, it is considered to be one of the most highly developed tourist towns in Greece. The history of the town begins in historical times, when it was the harbour of “Lato Etera”. It was also used as a harbour during Roman times and the First Byzantine Period.During the Venetian occupation a fortress was built called Mirabello because of the beautiful view. Nevertheless, the importance of the harbour lessened as the Venetians built another one more protected “The Port of San Nicolo”. The Name Aghios Nikolaos is that of the small Byzantine church located on the peninsula of the Port.
Spinalonga, since antiquity, was the Fortress which protected the harbour of ancient Olous. The name Spinalonga is Venetian (Spina = Thorn, Longa = Long)
The Venetians built a fortress here in 1579 to protect the harbour of Elounda, one of the most important and finest fortresses built on Crete. For half a century after the Turkish conquest of Crete, Spinalonga remained in the hands of the Venetians; finally in 1715 the fortress was handed over the Turks and they settled Ottoman families there.
In 1903 the Cretan Republic made Spinalonga into a colony for the lepers of Crete who they were housed on the island for nearly half century.


Above rate includes the following: 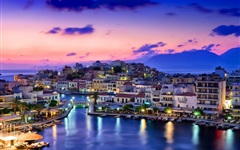 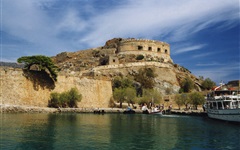 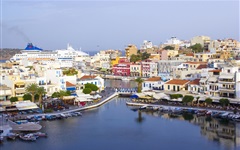