The ascent begins at the village of Mochos. Among walnut and plane trees, the renovated and well-cared for convent of Kera Kardiotissa, it is dedicated to the Nativity of the Virgin. The view from the terrace of its courtyard is magnificent. The unusual form of this church is the result of four successive building phases. The oldest is the little church to the east, which is used as a bema today with wall paintings from the 14th century. On the iconostasis of the church is the miracle-working icon of the “Panagia Alyssodemenis” (“The Virgin Chained”).
According to tradition, this icon had been transferred to Constantinople but returned to the monastery. It was stole again and chained to a column so it could not be taken. But the icon uprooted the column (it is fenced in the courtyard of the monastery) and returned here with it. After the village of Ano Keras the road continues to climb up to the defile of Ambelou, where right and left the road, rise up half-ruined stone-built windmills which ground wheat till the beginning of the century. At this point it is worth taking a break from the driving to admire the panoramic view. From here can be seen the Cretan Sea and the north coast of Crete. South, to the rear, rises up the mountain mass of Dikte, while before you spreads out the acclaimed Lassithi Plateau.
Lassithi is a plateau surrounded by mountains with eight natural entrances. It has always been a refuge for the persecuted and a place where revolutions started. During the Venetian occupation, the inhabitants were forced to leave Lassithi for nearly two centuries. Finds reveal that the region was inhabited during Neolithic and Minoan Times. During the Hellenistic and Roman Periods it belonged to the city-state of Lyttos. There were important sanctuaries and religious centers at the Trapeza Cave and at the Dictaian Cave at Psychro. Today there are around 20 small villages on the plateau. After the descent from the defile of Ambelou you meet up with a ring road that goes around the entire plateau. From west to east the road passes through the villages of Ag.Charalampos, Psychro, 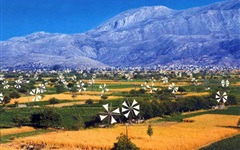 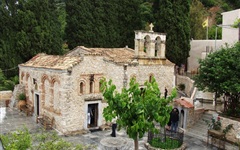 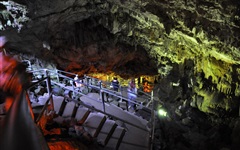